Congratulations to all Flyers who raced at Regionals over the last two weekends. There were countless pbs, plenty of finalists and tons of grit and determination on show.

Flyers grabbed a haul of 6 gold, 11 silver and 12 bronze medals – despite several members of the team being struck down with the lurgy at various points over the course of the two weeks. We also have 8 swimmers hitting qualification times for the Welsh Nationals in Swansea at Easter.

These are huge achievements and you should be as proud of them as the club, coaches and parents are.

Thank you to all coaches who helped with poolside duties. Without your commitment it wouldn’t happen.

We finally have located/ received the complete results from both Pembrokeshire primary and secondary schools Urdd galas. Primary results are in the excel sheet attached  and the secondary results are here: https://www.urdd4.org/canlyn…/canlyniadaugweithgareddau.a5w…

Well done once again to all who took part and represented their schools – you all did amazing! Not long until the finals now with Victoria, Dexter, Sammy and Oli competing in Cardiff on January 26th.

The club will close for Christmas on Dec 21st and only re open on Jan Mon 7th.

Merry Christmas to all our members.

The Urdd galas are almost upon us. All our swimmers are encouraged to take part.

Entry is via your child’s school – entrants must be Urdd members.

The winners of the county meets will progress through to the Urdd National Finals in Cardiff in January.

The Pembrokeshire Secondary Schools gala is on Tuesday 13th November at Tenby LC, from 7-9 pm.

The Pembrokeshire Primary Schools gala is on Wednesday 28th November at Haverfordwest LC, from 9.15am to 3.30pm.

Author Karl West
Hi All   I’m sure most of you will know by now, there is a problem with the pool at Haverfordwest for the Pembrokeshire Champs this weekend.   Due to the difficulties at the pool, organisers are having to run the Pembrokeshire County Champs with just 4 lanes.  The good news is that organisers are still able to accommodate all the events and swimmers.  The bad news is that fewer lanes means more heats, which will obviously result in longer sessions.    Details of the revised session times are in the link below, and if you need any further clarification then please don’t hesitate to ask.   See you at the weekend.   Updated Session Times – 4 Lane Meet 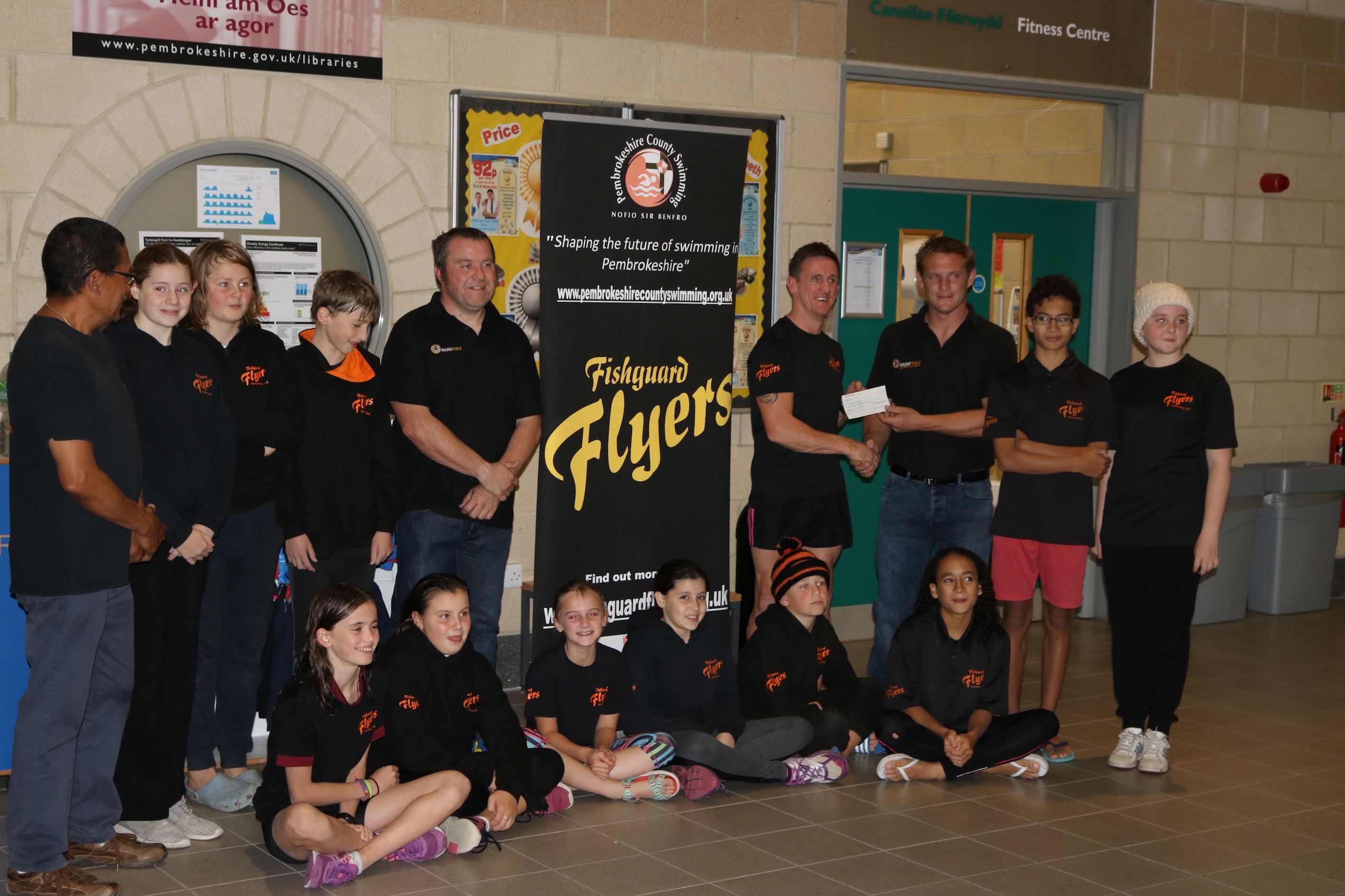 Cheque In: Round Table hand over generous donation

Flyers recently welcomed a few members of the Round Table, who delivered a generous donation towards the cost of our brand new lane ropes.

This is an essential piece of equipment for the club and Flyers has been overwhelmed with the support received to help us pay for them.

Flyers could not have done this without huge support from club members and the local community. As well as the Round Table, we received extremely welcome contributions from Lions and Fishguard & Goodwick Town Council.

Club members have organised fundraising events, including a bag-packing event at the Co-Op in Fishguard on Saturday 20th October and a sponsored abseil down Pembroke Castle a day later, on Sunday 21st October.

Friederike said: “Thanks to all the organisations that stepped forward to help us to pay for this essential piece of equipment. Thanks also to our fantastic volunteers and members who are playing their part by raising funds for the club.”

Pembrokeshire County Swimming, of which Fishguard Flyers are part of, welcomes Nick Russell to the PCS coaching team as new Assistant Coach. Nick has a vast experience of coaching at RCT Performance Swim Team. Nick has put swimmers on to Welsh National squads and is part of the Welsh coach development team program. He has also been selected to coach at this year’s inter-counties.

Nick is due to start on October 1st and will until then come and visit Pembrokeshire every Wednesday to start familiarising himself with our pathway and facilities. No dates as yet have been set for Club visits, but they will commence soon. Nick will certainly be there at the County Championships to throw an eye on all our talented swimmers.

In other news: We are very proud of Hans who has been selected for the Welsh National Skills Squad for this season. He will also compete in Sheffield on Oct 7th as part of the West Wales team in the Inter-Counties gala. 40 teams from all over Britain will race in two 25m pools over 6 events. We wish him and his fellow Pembrokeshire mates Rory, Sean and Rhys good luck!

Author Friederike
Many Congratulations to Rachael who has been selected to move up to Pembrokehsire County National Performance Squad. We are extremely proud of Rachael who has been taught to swim in FLC and been a Flyers member since she was 9 years old. Kayleigh F has been reselected for National Squad and will be joined by Hans and Rhiannon who have been newly selected to also train in National Squad. Great news, many congratulations to both and good luck with your training in Haverfordwest. I am sure their squad mates in Flyers and the younger swimmers will miss them but will be able to catch up with them during galas. We now have 4 Flyers training full time in Haverfordwest. Rhiannon’s mum Katherine, who is our membership secretary, is happy to continue with her role but will not be as frequently in the LC as in the past and we would encourage new parents to come forward to support Katherine in her role. Friederike, Hans’ mum,  will be reducing her coaching commitments to twice a week and is looking to drop a further night in January. We are asking for new parents to join our coaches’ team to help cover all the sessions our children enjoy attending. To a very good 2018/19 swimming season – GO FLYERS 😀

Summer Development meet: We had Victoria, Sammy and Rhys competing in Swansea achieving fantastic PB’S across the board. They really are making the club proud by standing up on the national stage at such a young age and swimming their best – over 2 or even 3 days. It’s a big event, embedded into the Summer Nationals and to be there and do well must be the highlight of their season. Well done you three!

Summer Nationals : The first thing to mention is the fact that our Welsh Summer Nationals are now called Summer Open, still run by Swim Wales over the course of a 7 day week. English clubs were always able to enter this meet but it felt like they are now outnumbering the Welsh clubs, certainly in the younger age groups 12, 13, 14 years old. In that context – as English age group swimming is even more competitive and a lot more dense than welsh age groups – it was a very difficult task to get out of the heats and into the finals and even harder to swim for the much desired medals. We had 7 swimmers competing – a record number for our tiny club. Some of them were there 5 or 6 days, some for one or some days. I think it is safe to say that for all involved this must have been the busiest, biggest, fastest meet they have been at so far. All Flyers took the challenge and got in the water and swam amazingly well. Everyone produced well executed swims and fabulous times.  Standing out were Rachael and Hans by getting into some finals, both in their breaststroke events – being able to swim in the evening sessions which are a little special since the swimmers are being announced by their names when they come onto poolside and the atmosphere was electric. Rachael (14yrs) made 3 finals and came 3rd, 4th and 5th – huge well done Rachael for that medal and an excellent show of skills – also in you other 2 events. Hans (13yrs) made 2 finals and came 4th and 5th. Big well done and also in the other 2 events. Special mention to Kaleb who had not raced in a long course pool and did superb. Alexa, Hans, Zac and Rachael all improving club records already in their names while Zac also added 1 new 12yr old record to his collection. Also Kayleigh F and Rhiannon are continuing to impress with star quality swims and constant improvements of their skills.

Finally a big big shout out to all parents and other family members who were there to support, feed and sweat! I can only speak for myself but this was the hardest gala to sit through – ever. END_OF_DOCUMENT_TOKEN_TO_BE_REPLACED